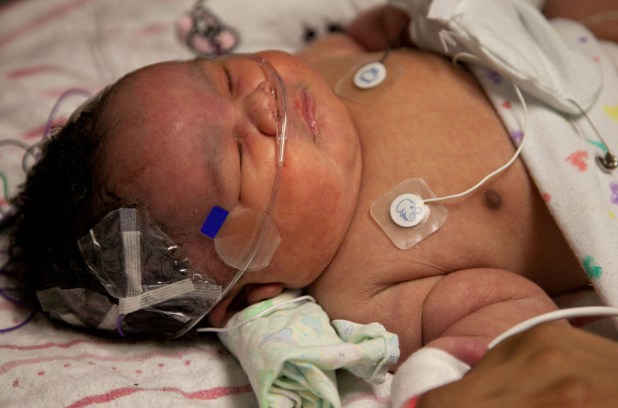 Robin Cyr’s fourth child has already packed a lifetime’s worth of emotional turmoil into her first 28 minutes in the world.

Cyr, 34, was told her baby girl had died just after being born in the IWK Health Centre in Halifax around 3 a.m. Saturday.

But shortly after getting the devastating news, a stuttering, breathless nurse rushed back into the room to say the baby had started breathing again.

“My aunt was there, and it’s a blessing because her prayers are very deep and strong,” said Cyr on Sunday, speaking in a whisper through tears at the hospital. “When she started praying, my baby came back.”

The big baby girl – who weighed nine pounds 14 ounces – got wedged in the birth canal during the delivery. Once she was born, Cyr lay on the bed waiting, for 25 minutes, for any sign of life.

A flummoxed surgeon told Cyr’s family that he had no explanation for the seemingly impossible recovery.

“He said it’s a miracle,” said Cyr. “He said, ‘I’m very sorry I gave up on your baby when I did, because I turned around and she’s breathing on her own.’”

The chubby little girl – with an impressive shock of dark hair – is now breathing on her own in the neonatal intensive care unit, and looks like any other healthy newborn baby.

Cyr’s family and friends say they’re still processing the miracle that trumped the miracle of birth.

“The way the story progresses, by the time you get halfway through, you don’t want to hear the rest, you’re like, I’m done. This is not going to end well,” said godfather Nevel Carvery. “Then to have it end the way it ended, it’s a roller coaster.”

Cyr had a name picked out for the baby, but said that will likely have to change.

A review is underway to determine what, if any explanation, there may be for the baby’s apparent resurrection – but Cyr says she knows the answer.

“All I can say is, hand of God,” said Cyr. “That’s what everyone’s saying, she’s here for a reason. God brought her back for a reason.”

Update: Halifax’s miracle baby has a name, is recovering