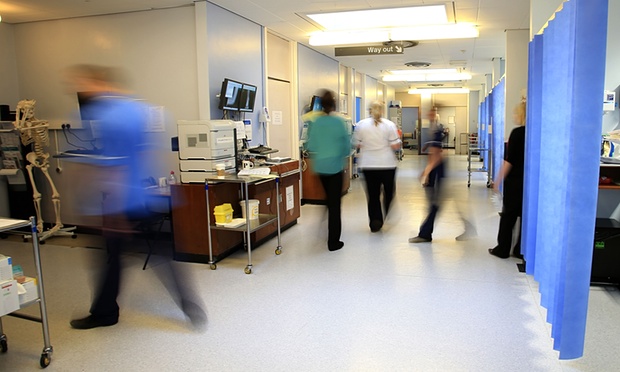 The number of young medics applying to continue their career in the health service by becoming specialists has plunged to a new low, according to leakedNHS figures that seem to bear out fears that the junior doctors’ dispute will hit recruitment.

Doctors’ leaders have described the figures as “very bad for the NHS”, especially as it is already struggling with shortages of key medical personnel in a number of areas, such as general practice and A&E.

The Guardian has obtained the figures just as many of England’s 45,000 junior doctors prepare to undertake a second 24-hour strike from 8am on Wednesday in protest at the new contract that Jeremy Hunt, the health secretary, is threatening to impose on them. At least 2,884 non-urgent operations have been cancelled, as well as an unknown number of consultations at outpatient clinics.

Figures compiled by Health Education England (HEE), the NHS’s medical training and education body, show that the number of Foundation Year 2 (F2) doctors who have applied to start training as a specialist in a branch of medicine next August in the NHS has fallen to just 15,855. That is 1,251 fewer than in 2013 – a 7.9% drop – and 453 fewer than the 16,308 who applied last year, a 2.8% decrease.

The number of F2 doctors seeking to become family doctors has fallen particularly sharply. Only 4,863 such medics have applied to train as GPs from this August – 25% fewer than the 6,447 who did so as recently as 2013.

That raises further questions about David Cameron and Hunt’s repeated pledge to increase the number of GPs in England by 5,000 by 2020.

There has also been a big drop in the numbers seeking to undertake what the NHS calls core medical training, which is the foundation for those seeking to pursue a career in many of the hospital-based specialties such as cardiology, haematology, respiratory medicine or gastroenterology.

Prof Sir Simon Wessely, president of the Royal College of Psychiatrists, said: “These figures are very bad for the NHS because we are in danger of losing an unknown proportion of young doctors who could be going into higher medical training and taking up roles in the NHS.

“They are further evidence that some junior doctors will probably be lost to the NHS. Some will go abroad, some will go into non-training posts and some of them will not be doing medicine at all. At a time when specialties such as general practice are critically short of new recruits, these figures show a further worsening of an ongoing, established trend.”

Traditionally, graduates of medical schools do two foundation years of training before choosing which area to specialise in. But while the number of F2 doctors doing so was falling before the junior doctors’ row erupted in September, the dispute appears to have exacerbated an existing downward trend, said Wessely.

Analysis Which country has the world's best healthcare system?

“To see such a large number of doctors junior considering their options and even leaving the NHS in the early stages of their careers is incredibly worrying,” said Dr Johann Malawana, the chair of the BMA’s junior doctors’ committee. “This will only worsen the recruitment crisis we are already seeing in many parts of the health service.

“Unprecedented frontline pressure combined with the anger and frustration about the government’s plan to impose an unfair contract, risks many junior doctors voting with their feet.”

Wednesday’s walkout follows the recent breakdown of talks between the BMA, NHS Employers and the Department of Health over the shape of the new contract that all juniors in England will operate under from next August. Negotiations have become deadlocked over the issue of whether some or all of Saturday should start to become part of a trainee doctor’s normal working week.

Hunt refused on Tuesday to deny reports that he had personally scuppered a deal that both the BMA and NHS Employers were happy with, which would have ended the five month-long dispute.